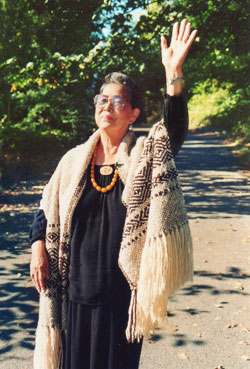 The Healing Heart is beating on!

ʔi siʔab, t̓igʷicid čəł dxʷʔal kʷ(i) adskʷaxʷads. Dear ones, we thank you for all your help and support. We are closer to reaching our goal of $40,000, and the work is continuing. It is so exciting to see the progress. It has been a journey to watch the raw footage of the interviews that took place before and after the symphony was performed. The beautiful healing within this story and the powerful music of the symphony will certainly bring some healing for our hurting world. -- Please share our campaign with others who may be able to provide some help. dahadubš siʔab, dahadubš.

Now through the end of November all donations will be TRIPLED!

(A generous donor has offered to do a deal matching donations through the month of November (up to $5,000 total), and Microsoft will match every donation as well.)

Vi Hilbert was already in her eighties, when she felt compelled to contribute what she could to a world in desperate need of change. In her lifetime she had seen resources being depleted, rivers running dry, oceans overfished, wars waged, and constant acts of violence from one human to another. She became increasingly worried about our world and its future. She had witnessed a world that had lost its way and believed people had lost sight of their humanity. After the world watched the tragic events of September 11, 2001, she was inspired to act. She had a vision to create something that would bring healing to a world that she felt was so broken. She trusted the healing power of music and believed what she called “high-brow” music would have the ability to reach people from around the world. Music, as a form of language, could touch and heal the wounded world.

Prompted by a dream, at the age of 83, Vi commissioned a Canadian composer, Bruce Ruddell to compose a symphony. She shared an old recording of Chief Seattle’s power song along with the healing song of one of her beloved cousins who was a traditional healer, with the composer and gave him strict instructions to listen to the recordings for inspiration only, as he worked on composing the piece. Several years later, on May 20, 2006, “The Healing Heart of the First People of this Land” world premiere concert was performed by the Seattle Symphony at Benaroya Hall to a standing room only audience. The performance received an overwhelmingly positive response, which solidified that her vision to promote healing and compassion was successful and must continue.

Fortunately, she had the foresight to partner with a filmmaker to document her journey through the symphonic cultural odyssey of “The Healing Heart of the First People of this Land.” Following the historic performance, several exclusive interviews were recorded with Vi, the composer, the conductor, musicians, and cultural leaders. Sadly, she passed away in December 2008 and never saw the documentary come to full fruition. Unfortunately, due to lack of funding and resources, all the raw footage of the concert and interviews has been lying dormant in post-production for more than a decade.

Vi was a deeply spiritual woman who longingly hoped for healing of our Mother Earth and all of humanity. She believed with her whole heart that the symphony was a spiritual gift from the culture of the First People of the Puget Sound area. She said, “It carries a message of healing and reminds the world that there is a living spirit in each person that needs to be honored.”

Now, more than ever, the world needs this healing. Amid the collective trauma felt throughout the entire world, this symphonic work cries out to be heard. With the ongoing injustices against people of color and the anxieties surrounding the Covid pandemic, the enduring strength and spirit of the Healing Heart symphony needs to be shared once again. Lushootseed Research is currently seeking funding for the remaining $40,000 to cover post-production expenditures to complete the documentary which will not only offer the healing power of music to countless audiences, it will also honor the strength and beauty of our nation’s First People. The healing and the hope that Vi longed to share with the world is as relevant today as it was on that historic day at Benaroya Hall in 2006. We are asking for your donation to help reach our goal and complete this documentary, bringing hope and healing to a wounded world.

Thank you for your support.

Lushootseed Research is pleased to announce the publication of Ron Hilbert č̀adəsqidəb: The Life and Work of a Coast Salish Artist, written by anthropologist Simon Ottenberg, Professor Emeritus of the University of Washington, Department of Anthropology. 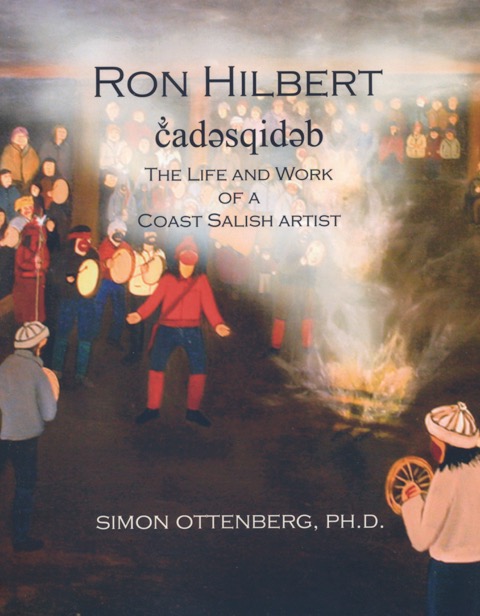 Coordination of the project was overseen by Lushootseed Research, directed by Jill LaPointe, the niece of the late Ron Hilbert. The book is rich in biographical information gained from numerous interviews and from the author’s friendship with the artist. Color photographs document the broad range of Hilbert’s work, from watercolor drawings to major installations of cedar and copper. Project activities included the editing of Ottenberg’s draft manuscript, research and selection of artworks by Hilbert, professional photography of the artwork, layout of the manuscript, printing, and distribution. The volume includes 39 illustrations including 35 photographs of Ron Hilbert’s artwork. The book is a unique contribution to the documentation and appreciation of Coast Salish art. This project was made possible with a grant from the 4Culture/King County Lodging Tax Fund.


Board of Directors, Friends & Advisors 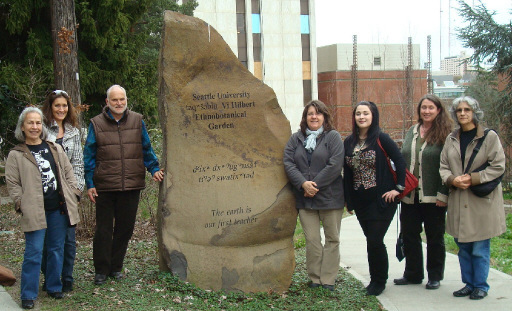 Lushootseed Research is dedicated to sustaining Lushootseed language and culture to enhance cross-cultural knowledge, wisdom and relations, as shared and celebrated by the First Peoples of Puget Sound, through research, recording, publishing and the presentation of oral traditions and literature.


Autobiography of the Founder

I was born and raised by Skagit (Lushootseed) speaking parents in the Skagit River area.

It was my privilege to become educated from birth to the customs and language of the Indian community to which I belonged. As it was the custom for Indian parents to take their children wherever they went, my parents took me with them. I accompanied them to tribal meetings, Shaker meetings, winter longhouse gatherings, deaths and funerals.

"It was the custom for Indian parents to take their children wherever they went."

In the summertime we met and worked with people from many other tribes from Washington and Canada as we picked berries. This was a hard experience but one I consider valuable. It gave me the opportunity to observe how different people dealt with their lives. It showed me the strength and resourcefulness they utilized under different occasions and their capacity to endure hardship but find pleasure in sharing these experiences.

In twelve years I attended 14 schools before graduating from high school. I graduated from Franklin High School, Portland, Oregon, in June, 1936. The sensitive kindness of Mr. Bell, the school principal, helped me to endure these two years in a big public high school. He recognized that it was a frightening experience for me so helped me in many ways. He took me to each of my classes and introduced me to the teacher. He boosted my self-esteem by charging the teacher to give me extra attention because I was special to him and he was planning to follow my progress. The teachers let me know that I could come to them any time I felt the need. They all kept their word.

I had chosen to leave Chemawa Indian School to work as a domestic in Portland so I could be better prepared to function in an unsegregated world. I was paid $10 a month plus my room and board for the two years that I worked for these people.

"It is a cherished legacy to the memory of our ancestors whose hearts would be gladdened to know that the culture of our people is being passed on to generations to come."

After graduating from high school, I married and had three children. My oldest child, a son, born in 1937, died at age 3 of tubercular meningitis. My daughter was born in 1938 and a second son in 1943.

Because it has always been my desire to see that my family is provided with the tools which will afford them a productive, happy life, I have worked to help provide them. Here are some of the things I have done: planned and operated a combination (café, gas and oil, groceries) business at Tahola, Washington; supermarket clerk; cookie packer, Danish bakery; shipyard welder; waitress, Chinese restaurant; Boeing food wagon cashier; Seattle Railroad School, telegraphy; secretary to the Director of Nursing, Children’s Orthopedic Hospital; Mr. Lee’s Beauty School training; since 1960 owned and operated a hairdressing business in one wing of my home; and currently I teach Lushootseed at the University of Washington.

After meeting Dr. Thomas M. Hess in 1967, he began tutoring me in the study of my language. He taught the first Lushootseed class at the University of Washington in the spring of 1972. It was called Puget Salish that quarter. I audited that class and have since then been involved with teaching the classes at the University of Washington… Dr. Hess and I have written the material in the textbooks.

Since 1972 the Melville Jacobs research fund has supported my research with three grants. The goal of efforts is to achieve the broadest possible corpus of written material in Lushootseed with the English translation. I now have over 700 pages of information typed. Copies are given to the consultants as I complete each topic. Copies of this research are also now housed in the University of Washington...

All of the time I have spent doing this research to date has been an act of deep respect to my elders and a donation to our Indian youth. It is a cherished legacy to the memory of our ancestors whose hearts would be gladdened to know that the culture of our people is being passed on to generations to come. This is a rich inheritance to give each generation strength and pride in their race.